Ryder asked me if I wanted to watch Marriage Story. My first thought was that he’s either a way bigger Noah Baumbach fan than I thought or he’s not aware of what the movie is really about. When I asked him about it, he said, “No, I really just wanted to watch it because I knew you would like it.”

He doesn’t really like movies with conflict that doesn’t include a magical land populated with centaurs or at least kings and queens. So a movie about the dissolution phase of two people’s marriage was not something I’d expect him to normally agree to watch with me, much less suggest it himself. Of course I could literally watch movies like that all day. When Ryder and I first started dating we spent a lot of time in Blockbuster talking about what movies we had in common, and over time we worked out that the overlap is for extremely clever rom-coms and some comedies, particularly satire or dramedies and maybe some action movies but definitely not many. Ryder actually introduced me to Noah Baumbach based on his 1995 wordy college movie Kicking and Screaming, which was a movie that Ryder could quote nearly line for line, not an easy feat considering it is chock full of amazing lines.

So I’m a huge Baumbach fan. My favorite (perhaps up until viewing this movie) is Squid and the Whale. I’ve seen the movie several times, in fact. What captures me about Baumbach’s films is how the central conflict is a separation from self in the sleepy way this tends to happen, from a variety of small traumas and copies of copies until suddenly you’re wondering what the fuck actually happened. The central character in his films moves from a chaotic sort of avoidance pattern to a more internal dialogue through recognition of a pattern that the character is stuck in, like a loop, or a haunting. In Kicking and Screaming the challenged worldview was about college and always working toward the next thing as a mindset and the inherent anxiety of capitalism. In Squid and the Whale it was about recognizing the patriarchy at work in our most intimate relationships, how mothers are continually discredited and discarded, eclipsed by the grandiosity of men. The Marriage Story, although I don’t wish to ruin it, is about the unheeded warnings in a relationship, particularly as it applies to women’s voices and men’s insensitivity or even total lack of recognition in listening to and supporting women’s dreams and ultimately, self-actualization. The thesis of the film is that this actually hurts men more than they realize, as they become more and more detached from their feelings, their relationships, and reality.

I watched a movie recently that I loved as a girl. It was the 1987 movie, Making Mr. Right with Ann Magnuson and John Malkovich (with blonde floppy hair as a scientist and the android the scientist made). Before rewatching the movie, it had evolved in my mind as a metaphor for men who become swept up in their own mythology as men, whether it is a job, a talent, or achievement. Something about the movie felt so right to me as a girl. There was a woman I could aspire to, a creative who was valued for her assertiveness and was a good friend and also could bring a robot into being a loving partner. LMAO. It explains my younger years, anyway. 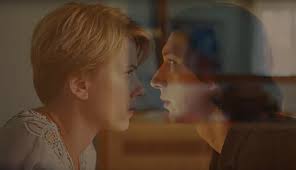 Marriage Story made it seem like separation was something that could happen to anyone. Of course, this has always been true. It’s nothing new. I’ve certainly had many friends divorce over the years that I thought were pretty damn solid.

The movie also made me wonder if the larger message was simply about separation from self made apparent through a relationship changing form. Indeed, after viewing the film, I wondered if there was anything I needed to say to myself. Sometimes I feel like writing is a way to internal dialogue. On the other hand, is is mitigating to a degree. How can one feel something if one is writing it at the same time? But I can’t change this about myself and I don’t really want to. So I asked myself one question: “What do I want?” What do I want?

I asked Ryder if he related to the characters in Making Mr. Right, and if so, which one. He couldn’t answer because he was playing a video game. Something about this struck me as incredibly funny. I asked him again later and he said a mix between the two. He’d never be up for anything like the android but at the same time he didn’t feel he was so walled off like the scientist.

I wondered also if there was a way I saw him that was filtered through my own experience. There’s a scene in Marriage Story when Adam Driver’s character is accusing ScarJo’s character of being just like her mom. Then he says she’s also like her dad, his dad, and his mom. He almost can’t decide. He goes with her mom, possibly because it seems like it would bother her the most.

I guess my core fear is that people I love may become the scientist who decides to be an android shot up into space. Is there anything scarier or more desolate? Of course, Ann Magnuson’s character loved the android, not the scientist, so I’m interpreting the whole thing wrong. Stick with the android who loves you, don’t worry about the scientist who wants to be shot into the ether. Ryder said maybe he had some of the scientist’s skills because he tends to be discerning with his energy and time. So maybe I really am in love with a hybrid.

The other day I bought new jeans and Ryder admired my ass in them and then said, “Did you buy those for your crush?”

I smiled and said, “Yes. I know how he likes my ass in jeans, so I bought these just for him.”

He smiled, looked up at me like a shy boy. “You know me so well.”