I’m not sure if it’s my age or the Vyvanse, or that I’ve been out of the brick-and-mortar work force for quite some time, but I’ve been getting work crushes lately that feel like I’m Trinity internalizing feels for Neo right before she whispers in his ear that he is THE ONE.

Seriously, it’s pretty much dominating my thoughts. And it’s mighty irresponsible for me to write about it because I actually might tell my current crush my secret writer identity and then they’ll read about themselves here. Not that I’m not being totally obvious already, knowing me.

They might blush a little bit and I ask you, what is more adorable than a control freak who blushes?

Anyway, today I was thinking about the structure of the work crush and it is set up in a certain way, especially if you work in education. The thing is, I don’t remember this happening at all the last time I worked in a school, although I was very fond of my co-workers, I didn’t think about slamming them against the wall or getting spanked by them or playing with their hair or any of that. My therapist, who specializes in ADHD and has ADHD himself, said it could be the medication actually. “Or,” he said, “it could just be S.O.S.”

“No, Shiny Object Syndrome.” He didn’t need to say more really. It resonated.

“What should I do about it?”

“Well,” he said, “Shiny Object Syndrome usually lasts about 90 days, give or take. Just enjoy it.”

I don’t know about you, but for me, analysis is a big part of enjoying things.  That’s why I’m going to give you three important characteristics of a work crush.

The first thing that must happen is accidentally running into them repeatedly. This is really the only requirement to beginning the work of crushing on someone hella hard. You see them in the hall, the copy room, the office adjacent to yours, department meetings, etc. This is important because as an adult this almost never happens. This happened mainly when we were younger, or perhaps most recently in college. Repetition does something very important to our crush neurotransmitters. So let’s say the person looks really cute in a leather jacket. That means when you go to meetings you see them in the jacket and you’re like, “Omg. THEM.” Like damn they look even cuter in that leather jacket than they did yesterday, but not as cute as they are going to look in it next time I see them. So the next time you see them in the jacket you’re like, “WHOA wtf that jacket,” then something else incredible happens — you see them in a DIFFERENT jacket. And it’s like holy shit I never knew their cuteness in jackets was so versatile.

They must appear interested but not consistently interested. I did not know this was a feature of the workplace crush but I’ve definitely been noticing this. I definitely feel a little electricity with this particular crush, although reciprocity isn’t essential, this person is completely crushworthy without any kind of return, but the electricity feels confusing to a degree. This is actually the most interesting electricity there is. So one day they’re like, “hey” and seem kind of lost in their own thoughts or the work they do with the papers and computer things, and then all of the sudden they extend an invitation to lunch and are sort of awkward about it, like they’re looking at their phone and kind of smiling and then there’s that little bit of a blush again and you say, “Sure I’d LOVE to.” and then you’re like what, why did I say LOVE and why did I say it so strangely. Then you go to your office and tell your work BFF that she has to go to lunch with you too but you don’t tell her why because she will tease you mercilessly about this crush if you do because she hasn’t seen you crush on anyone at all when she’s been checking out butts left and right and you’ve been like, “ugh boring.” and your friend was like, “are you sure you aren’t like, full lesbian,” and you were like, “you don’t have to be full lesbian to consider women more attractive,” and she sort of nodded like I had a point but still ogled the science teacher’s butt.

The science teacher is a dick, by the way. I talked to the tech guy and he told me the dude is a total whiner and CC’d admin on an email admonishing the tech guy for not helping him when he didn’t do a good job trying to fix the projector the dude broke.

“What do you call a dude who’s a Karen?”

They must remind you of something or someone you love or have loved. I am not 100% sure with this crush, but I think it’s probable they remind me of my most tragic crush of all time, back in my twenties. This one reminds me of that crush because they have similar voices, confident and sort of melodic. They’re both brilliant and really good with kids, they have kind of an energetic mode, it’s kind of rare because it’s also very authentic and playful, not a put-on at all but like they’re being more themselves that way. I sound like Holden Caulfield but the point is it’s not at all something a goddamn phony would do.

This one, unlike many of my other crushes with the exception of my husband, seems to have good boundaries. I didn’t used to think boundaries were hot at all, and I used to get boundaries confused with actual stonewalling but now I can see that my current crush has pretty good boundaries. When people start to gossip they kind of politely disengange, and when people start acting overwhelmed, they respond with a detached but not unpleasant demeanor. They’re also extremely competent and reliable and I find that pretty hot as well.

In that way they actually remind me of my husband. I had a friend once who said you should get energy from your crushes and bring it to your relationship to energize it. My husband is a little bored by my crushes but I still tell him about them because I don’t want to be alone with anything ever. When I found out one of my crushes was poly, I asked Ryder if he would be open to being poly and after he asked me what it was, he responded with the following (as texted to my work BFF): 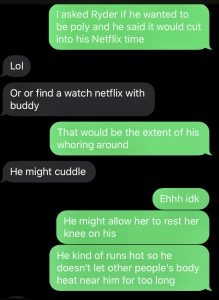 I think the other thing they remind me of so much is queer culture and my relationship with it. I love that identity shift and everything that comes along with it and just that exploration around self and sexuality and gender and I see them going through that and think whoa. I remember that and I still feel that. That’s it, that’s the magnetic pull.

But they do look cute as hell in that jacket.